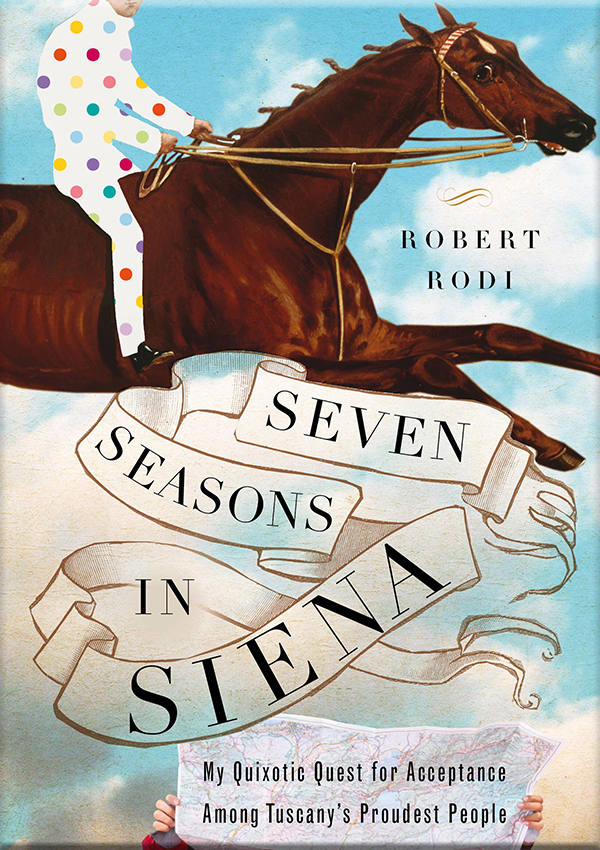 My Quixotic Quest for Acceptance Among Tuscany’s Proudest People

Into this strange, closed world steps Robert Rodi. A Chicago writer with few friends in town and a shaky command of conversational Italian, he couldn’t be more out of place. Yet something about the sense of belonging radiating from the ritual-obsessed Sienese excites him, and draws him back to witness firsthand how their passionate brand of community extends beyond the Palio into the entire calendar year. Smitten, Rodi undertakes a plan to insinuate himself into this body politic, learn their ways, and win their acceptance.

Seven Seasons in Siena is the story of Rodi’s love affair with the people of Siena?and of his awkward, heartfelt, intermittently successful, occasionally disastrous attempts to become a naturalized member of the Noble Contrada of the Caterpillar. It won’t be easy. As one of the locals points out, someone who’s American, gay, and a writer is the equivalent of a triple unicorn in this corner of Tuscany. But like a jockey in the Palio outlasting the competition in the home stretch, Rodi is determined to wear down all resistance. By immersing himself in the life of the contrada over seven visits at different times of the year?working in their kitchens, competing in their athletic events, and mastering the tangled politics of their various feuds and alliances?the ultimate outsider slowly begins to find his way into the hearts of this proud and remarkable people.

By turns hilarious and heartwarming, and redolent with the flavor of the Tuscan countryside, Seven Seasons in Siena opens a window on daily life in one of the most magical regions in all of Italy?revealing the joys to be found when we stop being spectators and start taking an active part in life’s rich pageant.